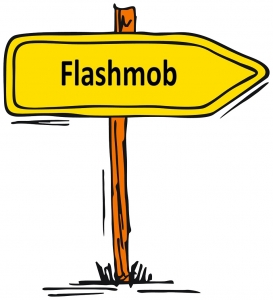 While activations can and do take place anywhere and in just about any form, often all you need is a spontaneous song and dance to turn your frown upside down.

Urbandictionary.com defines a flash mob as “a group of people who appear from out of nowhere, to perform predetermined actions, designed to amuse and confuse surrounding people.” What better way to initiate relationships between consumers and your brand?

Since the advent of the flash mob in New York in 2003, it has been used as a highly effective brand activation and marketing tool. The element of surprise creates an unforgettable experience which leads buyers to awareness for your brand. Not only that, but more often than not spectators video the production. With smart phones being so prevalent, chances are that by the time you have completed your show, it has already been filmed, uploaded, and shared by a large majority of the audience. The joy in this is that one flash mob organised by you gets multiple videos and shares at the hands of complete strangers. How does that sound for effective marketing?

A staged flash mob may appear to be a spontaneous once-off event, but behind the scenes it has been preceded pedantic preparation and rehearsal. In fact, the more preparation that goes into it, the more spontaneous a flash mob event seems. In order to successfully pull off this powerful marketing, there are a few aspects to bear in mind:

If you are inspired to use a flash mob for your next promotion or event, please contact us today for more information.