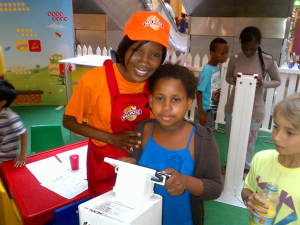 Leading experiential activation agency, Tradeway, executed an out-of-store and in-store engagement sampling campaign for Melrose to connect with mothers and; drive further enthusiasm and excitement with kids and tweens.

Melrose wanted to iterate its position as market leader and cement top of mind awareness with its consumers. Part of the activation was communicating the on-pack promotion where shoppers stood to win 1 of 100 Nintendo 3DS XL consoles. A critical part of the campaign was reinforcing to parents that Melrose was the perfect and convenient lunchbox solution, whether as a convenient snack or an ideal spread for sandwiches.

The activation focused on two components. The first was creating demand and awareness at centre courts prior to kids going back to school. The second was closing the sale when the activations went in-store at the end of January through to March 2013.

Centre courts were highly interactive with high engagement for both shoppers and consumers. There were three engagement zones. The first was the activity zone where kids could colour in and/or complete the maze. The second was the gaming zone where one could try out Mario Brothers 2 on the Nintendo. Lastly, the photo zone encouraged parents to have photos taken with their kids on presentation of proof of purchase of two Melrose product

The centre court activations took place at Clearwater, Menlyn, Canal Walk and Gateway malls. Consumers commended the team for the high engagement and educational value. In-store focused on 39 hypermarkets, nationally. The brand ambassadors approached over 30,000 shoppers in only five weekends converting over 40% of engagements into sales.