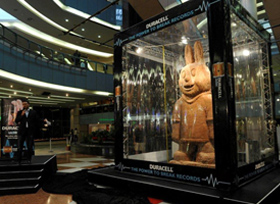 Leading experiential company, Tradeway Promotions has announced that it has successfully executed the in-store experiential component for Duracell’s Easter campaign which saw the brand break the Guinness® World Record for the largest chocolate bunny at 3.014 tonnes.
Duracell’s Easter initiative was an integrated campaign which included radio, experiential (in and out of store), public relations and social media. The campaign achieved pervasive publicity locally as well as internationally with the story being covered by major broadcast networks such as CNN, BBC, Sky News, ABC, NBC and Fox to name a few.”The crux of the campaign was to capitalise on the South African consumer’s positive affinity with one of the world’s most recognized icons (the Duracell Bunny) through publicity. Although press coverage was a KPI, we also needed a strong commercial drive that would see Easter become a major seasonal driver for Duracell®. This is where Tradeway came in,” says Jason Frichol, Fore Good’s Head of Marketing.Mini chocolate replicas of the world record breaking bunny were produced. Tradeway activated a national in store campaign where promoters were giving away the bunnies in exchange for a purchase of any Duracell pack. Tradeway’s promoters also promoted the competition linked to the initiative in addition to educating consumers on Duracell’s new Ultra battery range. The company managed the scale and complexity of the initiative which included logistics, national distribution, casting, training, booking of stores, reporting as well as providing resources at the unveiling – signing in and hosting the press.

Tradeway’s Managing Director, Michelle Francis, concludes, “The Fore Good Group is known for pushing the boundaries in experiential activations linked to strong commercial objectives. A tight knit working relationship with the team was paramount – executing according to the brand objectives and driving sales at store level with measurable results that positively impacted the bottom line.”