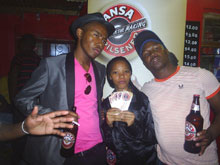 Tradeway Promotions, leaders in the recruiting, training and managing of resources for experiential brand activations, managed the consumer recruitment element of the highly successful Hansa Pilsener “Legends in the Making” campaign, which through face-to-face interaction saw 2 000 Hansa Pilsener consumers being rewarded with tickets to staged music concerts nationally.

The recruitment activations formed part of the multi-pronged campaign run by South African Breweries Ltd brand, Hansa Pilsener to create hype and awareness around the thirteen “Legends in the Making” music concerts, identifying and rewarding loyal Hansa Pilsener consumers and new users, typically black males 18-34 years in age, with tickets for themselves and two friends to attend the concert in their region.

In addition, the campaign was supported by an online social media facebook page. Promoters handed consumers cards providing details of how to interact directly with the brand via the Hansa Pilsener Legends in the Making Tour facebook page, to increase their chances of securing concert tickets. This provided an additional platform for customers to engage with the brand and more importantly for the brand to engage directly with customers and potential customers on an ongoing basis.

Hansa Pilsener was first introduced into the South African market in 1975 and is brewed with the unique “Kiss of the Saaz Hop”, giving the beer a crisp and refreshing taste that has made the brand a favourite amongst South African beer drinkers. 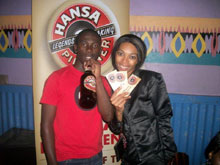 The “Legends in the Making” campaign was based on the premise that SA Music legends including Liquid Deep, Hip Hop Pantsula, Teargas, JR Ntando, Tuks, Kwela Tebza and DJ Deelou who like Hansa Pilsener have a special ingredient that has led to their success.

The campaign outcomes proved very successful for Hansa Pilsener as promoters engaged with close on 20 000 consumers, issuing over 5 000 sets of tickets and recording around 15 000 Hansa Pilsener sales nationally over the three month activation time frame.

“The success of the Hansa Pilsener ‘Legends in the Making’ campaign can be measured on various levels,” explains Michelle Francis, CEO of Tradeway Promotions. “We applied our expertise establishing a face for the brand through consumer engagement, and demonstrated our ability to manage the complexity of the activation on all levels, including supplying the client with ongoing measurement of results with respect to the number of Hansa Pilsener consumer interactions, concert tickets issued and product sales figures, which were the key deliverable of the campaign,” says Michelle.

“My involvement with Tradeway Promotions has been a very rewarding and gratifying experience. They provided a seamless and professional service, ensuring that the objectives of the promotional campaign for the Hansa Pilsener Legends in the Making Tour were achieved beyond my expectations. The entire campaign has been a phenomenal success and I appreciate Tradeway Promotions support and commitment to the campaign from beginning to end,” commented Guy Shand, Hansa Pilsener Brand Manager.