KFC appointed Tradeway Promotions to run a nationwide sampling campaign to introduce the a.m. Riser breakfast meal to customers in store during April and May 2012.

Tradeway Promotions conceptualised the KFC a.m. Pyjama Party campaign, which saw promoters dressed in branded KFC a.m. pyjamas and red slippers interacting with over 50 000 customers at more than 200 KFC breakfast stores across South Africa between 06h30 and 10h30 on promotional days. The team offered them the opportunity to sample the a.m. Riser, a delicious combination of hash brown, egg, a slice of cheese, fresh tomato and a tomato relish served on an English Muffin.

The campaign, which was implemented to create awareness of the KFC a.m. Breakfast Range, focused specifically on getting customers to try the a.m. Riser as a part of the KFC breakfast offering and the team succeeded in both encouraging trial and purchase during this promotion.

“In our role as leaders in recruitment, training and managing of resources for our clients product awareness campaigns, we were thrilled with the results that emerged from the introduction to market of the KFC Breakfast Range. We used face-to-face engagement coupled with sampling of the a.m. Riser, and were very pleased that the campaign objectives were achieved for our client and that the introduction of the range was a success,” said Michelle Francis, CEO of Tradeway Promotions. 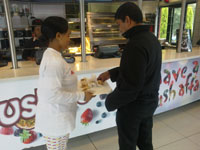 In excess of 37 000 a.m. Risers were sampled by customers during the promotion and promoters reported that customers were very impressed with the KFC a.m. range and expressed delight at the taste of the new Riser.

“Tradeway Promotions conceptualised and delivered a highly effective campaign to drive awareness of the a.m. Riser and the KFC Breakfast Range to our customer base, achieving our objectives through a creative and focused promotion. The promoters’ very appropriate ‘pyjama’ wear was sheer genius,” said Vickey Jacoby, Assistant Brand Manager for KFC.

Breakfast is now available in over 220 KFC stores between 06h00 and 10h30 and customers have the choice of a number of breakfast options including the Riser, Oats, Muesli Cup, Toasted sandwiches and more. Visit kfc.co.za to view the full KFC a.m. range as well as find a breakfast store closest to you.