SAB Ltd partnered with Tradeway Promotions to introduce the new 330NRB Hansa Pilsener bottle to consumers. The new bottle, which has a sleek embossed body, has been introduced to bring the packaging in line with the brand positioning of “Being refreshingly different.”

Over 40 000 consumers were introduced to the new bottle between August and October 2011, through engaging activations where customers were invited to participate in a Hansa Pilsener guessing game. Visitors to targeted outlets were encouraged to blindly touch five embossed bottles, and correctly identify the new Hansa Pilsener 330NRB bottle. Successful customers were rewarded with branded key rings and single Hansa Pilsener gift packs.

Customers at ShisaNyama’s, (informal gathering and eating places in townships that specialize in braai’s and serve alcohol) were offered an ice cold refreshing 330NRB Hansa to enjoy, which instilled brand loyalty and offered the opportunity for the brand to confirm that the bottle may have changed but the beer retains its unique crisp Kiss of the Saaz Hop refreshing flavor. 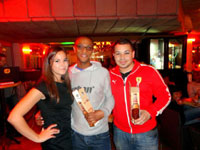 “In our role as leaders in recruitment, training and managing of resources for our clients brand activation campaigns, we were thrilled with the results that emerged from the introduction to market campaign for the new 330NRB Hansa Pilsener bottle. We used the face-to-face engagement with the public to secure additional market information for SAB, and were very pleased to report that 82% of customers said that they prefer the new Hansa Pilsener bottle. Given the usual resistance to change, this was a very positive outcome for Hansa Pilsener,” said Michelle Francis, CEO of Tradeway Promotions.

Tradeway Promotions recruited promoters in 13 towns nationally, to undergo intense training. Training documentation and tests were developed by the Tradeway training department in consultation with the Hansa brand team. Promoters had to achieve a minimum of 80% in written tests on brand theory and campaign mechanics, as had to participate in a number of role playing exercises to ensure they were prepared for their direct interaction with customers, when introducing the new bottle.

“Hansa Pilsener has enjoyed a 36-year history in South Africa, and it is always a challenge to introduce new packaging to a market that is extremely brand loyal and tends to resist change when it comes to their favourite brands. Tradeway Promotions designed and delivered a highly effective campaign that achieved the objectives of the campaign through their seamless customer activation offering,” said Guy Shand, Brand Manager for Hansa Pilsener.