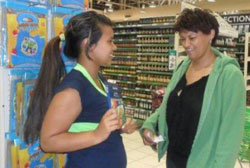 Tradeway, executed a back-to-school campaign that drove switching to Staedtler. Staedtler is one of the world’s leading manufacturers and suppliers of writing, colouring, drawing and creative products.

The retail channel has become an increasingly important channel during the back-to-school period. Time-pressed moms and dads find it convenient that there is a one-stop destination for most of their children’s back-to-school needs. However, with the proliferation of brands and many shoppers being deal-seekers, it is important that Staedtler drive the quality and value features of its offerings, which deliver more cost efficiencies for the shoppers in the long term. 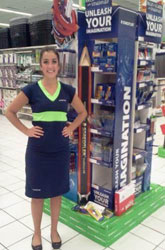 Staedtler and Tradeway took a category approach, driving more revenue for the retailer and delivering added value for their shoppers. The activation centered on delighting shoppers. The brand ambassadors received extensive training on Staedtler products and category in addition to the stationery requirements that students need from Grade R right though to Grade 7. Focusing on 50 Checkers, Checkers Hyper and Shoprite Checkers Stores in January and February 2013, the brand ambassadors assisted shoppers with navigation, finding products on their shopping list and advising them on the value and quality offering that Staedtler provides. This culminated into a unique shopping experience which also maximised the cross and upsell for the retailer. Another component of the campaign was a ‘dictate your prize’ competition to drive purchasing. Shoppers had to spend over R70 and they were automatically entered into a prize draw of R110,000 for their choice of a new car, an overseas trip, a bursary or cash.

The majority of shoppers that purchased stated that they switched from another brand and chose to purchase Staedtler products as a result of the activation. Over 58,000 shoppers were approached over the six week promotional period which lead to over 320,000 units purchased for Staedtler.