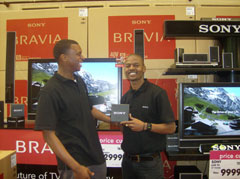 Tradeway Promotions has announced that it has completed its in-store promotional campaign for its client, Bravia, the High Definition (HD) TV offering, driven by unique Sony technologies with world-first features including Motionflow, inspired design, wireless connectivity and environmentally-aware production.

The promotion followed an edutainment approach with Tradeway brand ambassadors enlightening consumers on Bravia’s differentiated offering and reiterating how its HDTV offerings are revolutionising the in-home entertainment experience. The second tier was focused on conversion, offering consumers a R2,000 voucher against their Bravia HDTV or they could redeem it against DStv’s HD Decoder.

Warren Diedericks from Sony SA, says “the national Makro campaign in conjunction with DStv has been one of our most successful to date. Bravia is an existential brand, and interactively engaging and interacting with consumers was of utmost importance. Especially if one considers our differentiated and superior offering compared to other brands playing in the sector.”

Tradeway played a pivotal role in the success of the campaign. Michelle Francis, Tradeway’s managing director concludes, “We are a leading Activation Agency in South Africa working for world-class brands such as Sony South Africa. Working with big brands means you have to deliver big results. You need to have a deep understanding of the campaign objectives and the company’s brand strategy. This is the difference between achieving satisfactory results and exponential return. Thorough training techniques, efficient systems, tight controls and commitment to excellence supercede client expectations and campaign objectives.”